Self directed university brief:
This project was born out of lockdown boredom when I came across ‘Stasiland: Stories from Behind the Berlin Wall’ by Anna Funder — a very interesting read documenting the extraordinary stories of people from former East Berlin. Reading the tales of the ordinary people involved made me want to uncover more forgotten real stories, from real people.
Speaking to people that hand first hand experience during the period from a West Berlin perspective was interesting. The thing that came up the most was how scary the border crossings and searches could be as well as the complete change of atmosphere the night the Wall was demolished. When returning to the “West, you had to leave the car which was almost taken apart, boot emptied including spare wheel compartment, seats lifted, mirror under the car, sniffer dogs, very stern looking soldiers.” I found that this is something that is still taught and talked about within German families, especially those that moved away, with their children wanting to know more about their families involvement and stories. And so, this project is aimed at young German heritage tourists who want to learn more about the people involved and personal experience rather than the events themselves.
What is it?
The Tränenpalast (nicknamed the Palace of tears) is a former border crossing point between East and West Berlin, at Berlin Friedrichstraße station. It is now a museum with exhibitions about Berlin during the Cold War period and the process of German reunification. The museum itself helps to tell stories of the ordinary people and so, I chose to use the museum as a platform to tell the story of Leslie and Ingrid who were engaged but then separated when the Berlin Wall was built. These illustrations reflect the journey they took to smuggle Ingrid from East to West Berlin, their encounters with the Stasi and life reunited in West Berlin. The illustrations are used as site specific, modular murals and have been incorporated into the museum’s existing branding to enhance it and bring to life the focus of the museum: the tales of the ordinary people that make Berlin what it is today.

Illustration 1 — Leslie's point of view and his journey to meet Ingrid at Friedrichstraße station in the East.

Illustration 2 — Ingrid's point of view and her journey to meet Leslie at Friedrichstraße station in the East.

Illustration 3 — Crossing the border together.

Illustration 4 — Life in West Berlin and the fall of the wall.

Modular examples found through the journey to the museum.

Visualisation of where murals will be found.

Modular Design
The grid design allows the illustrations to be taken apart and re-purposed to use across the museum’s branding. For example, signage used in the museum for the Stasi exhibit.
Accompanying brand patterns use icons from the illustrations, to be applied decoratively to brand material and used around the city as a touchpoint.

Modular postcard example. Tourists can buy sections of the illustrations to create their own narratives.

Sketchbook
To get an insight into my design process, click to see each page in more detail: 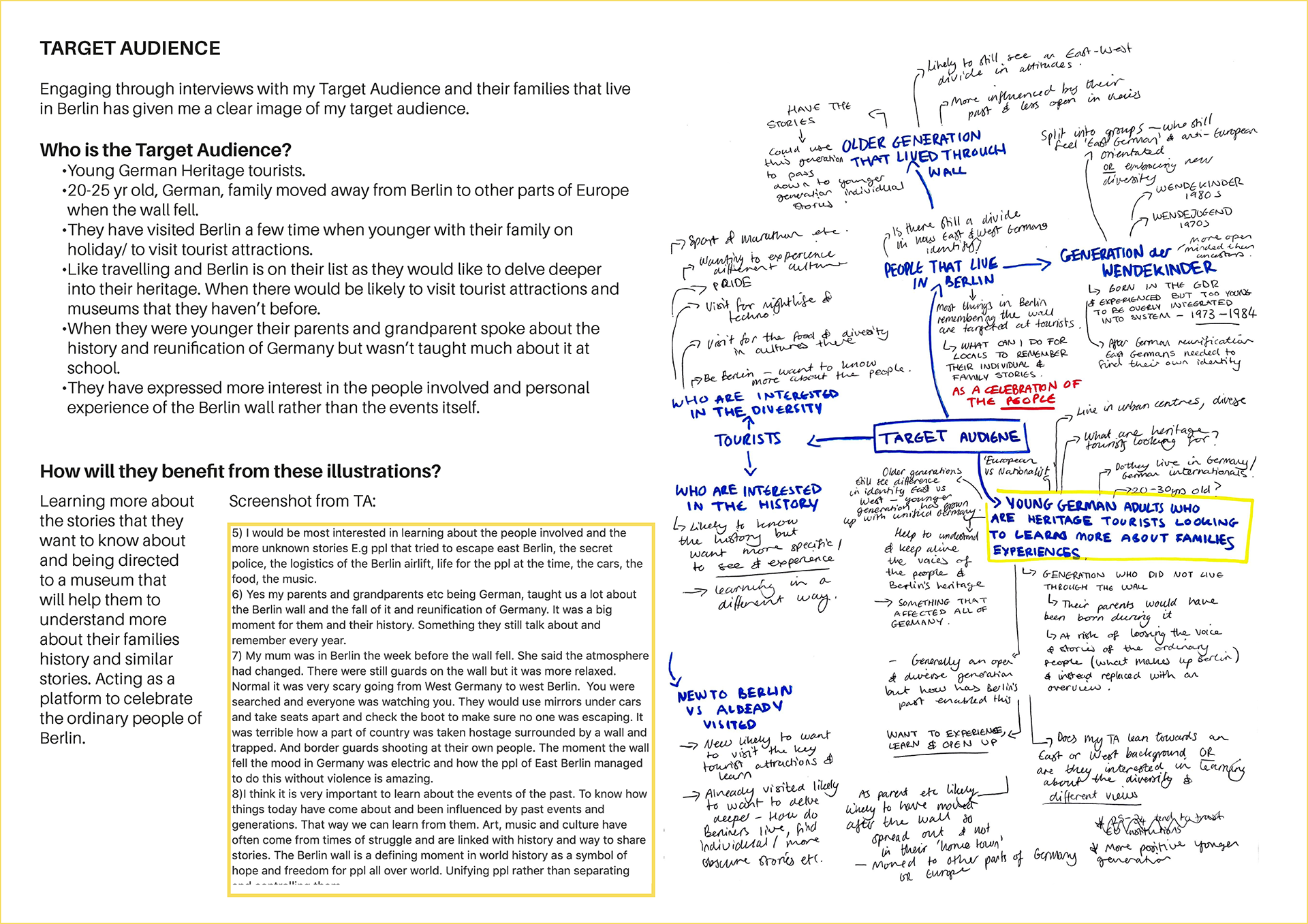 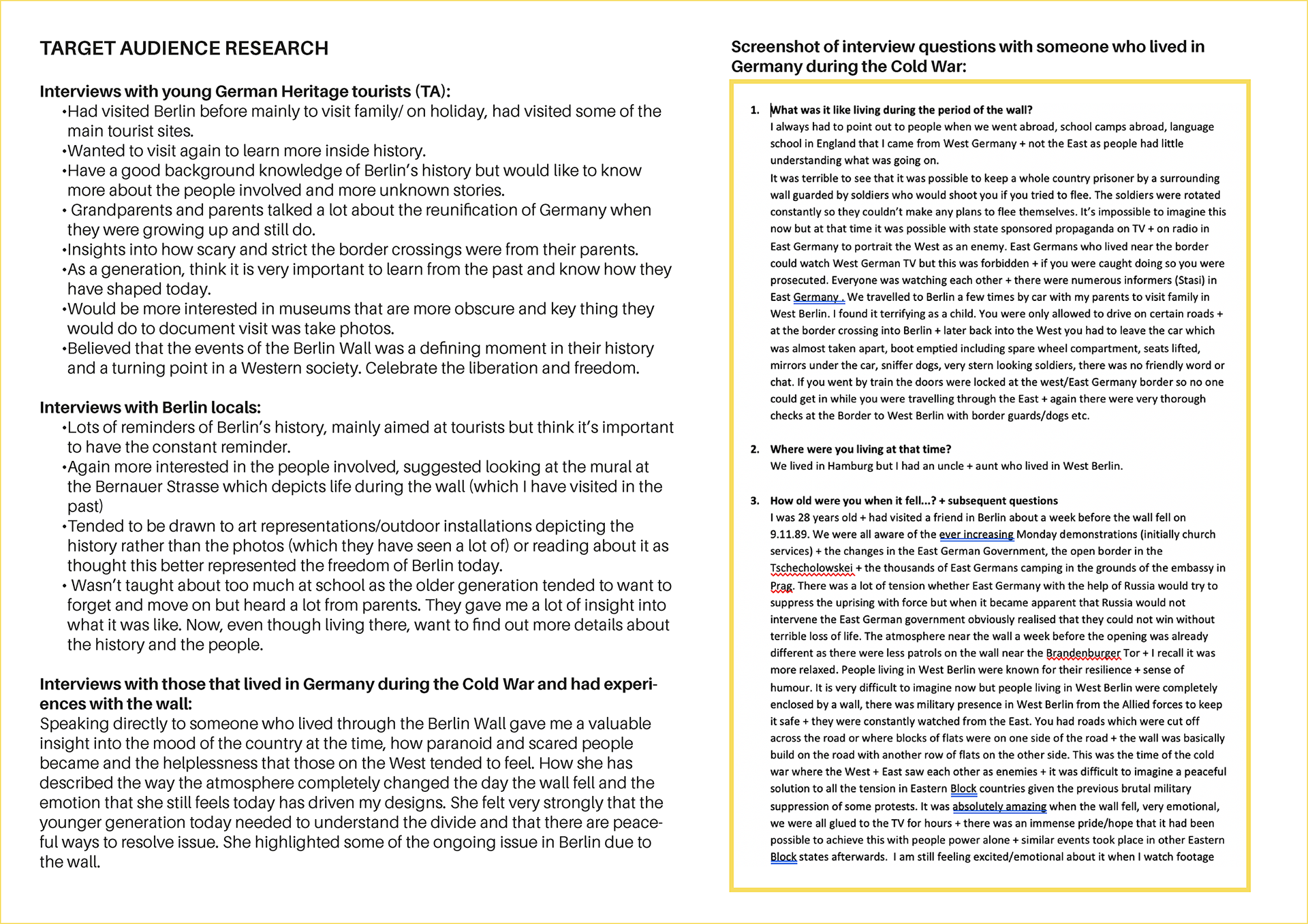 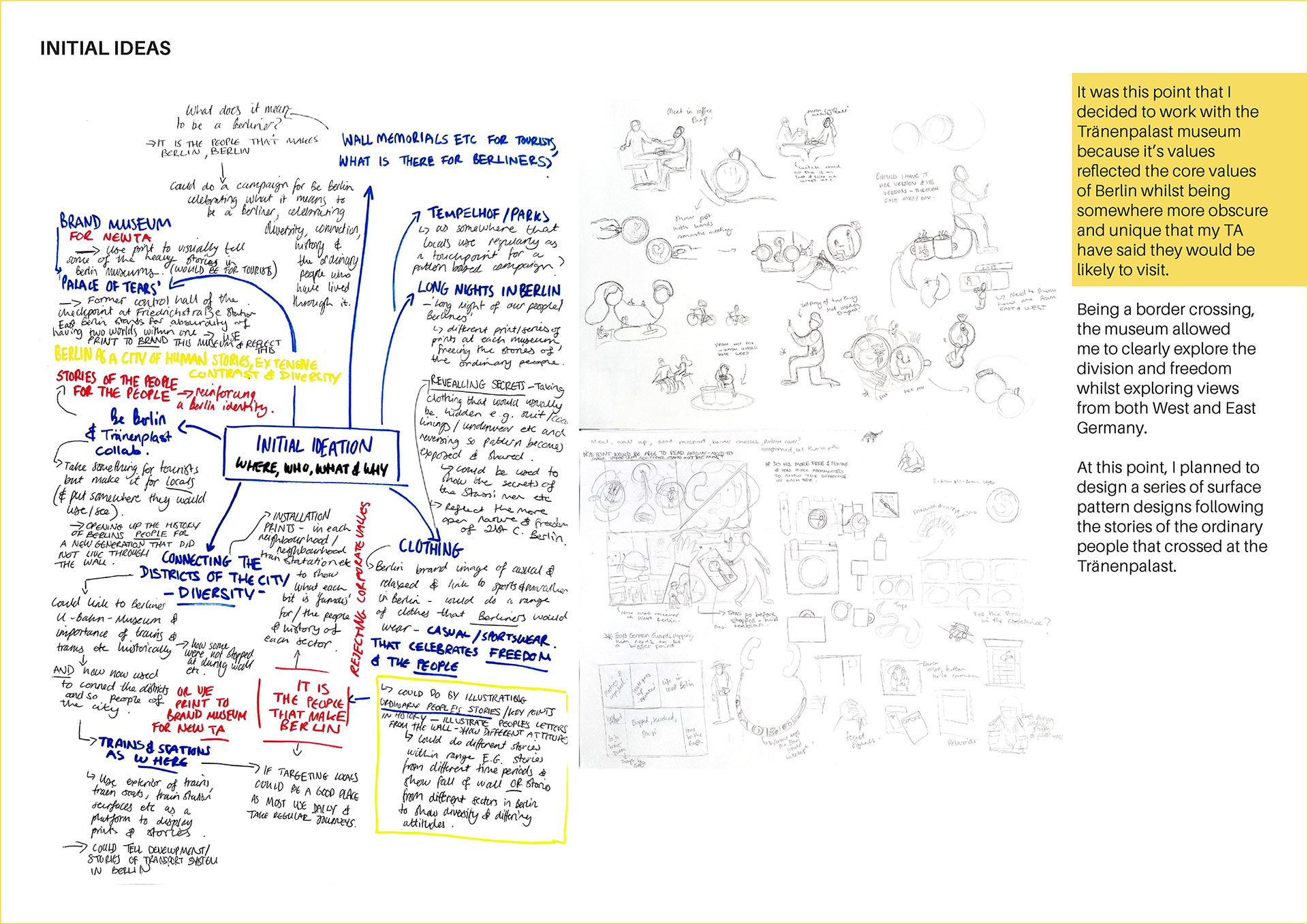 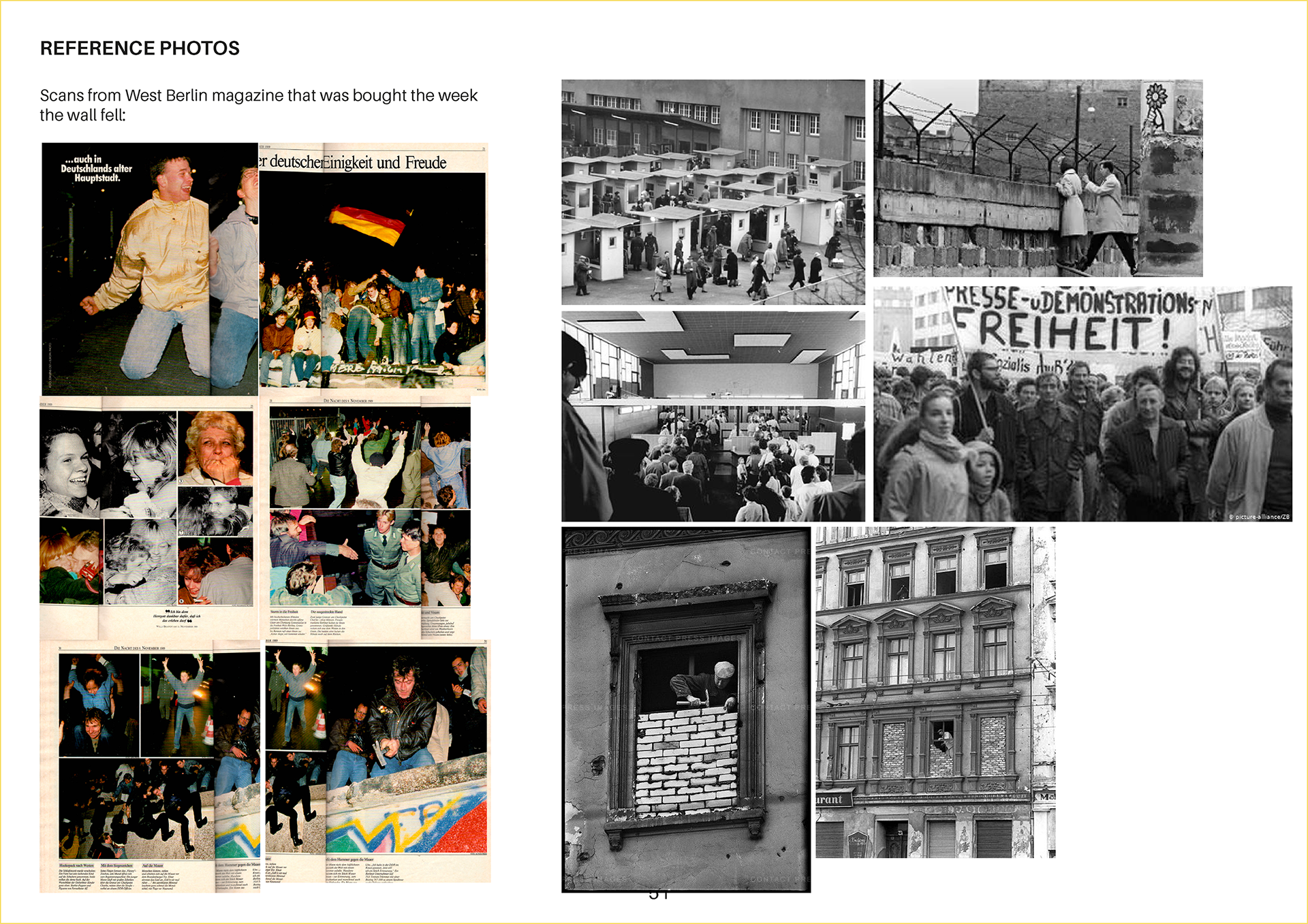 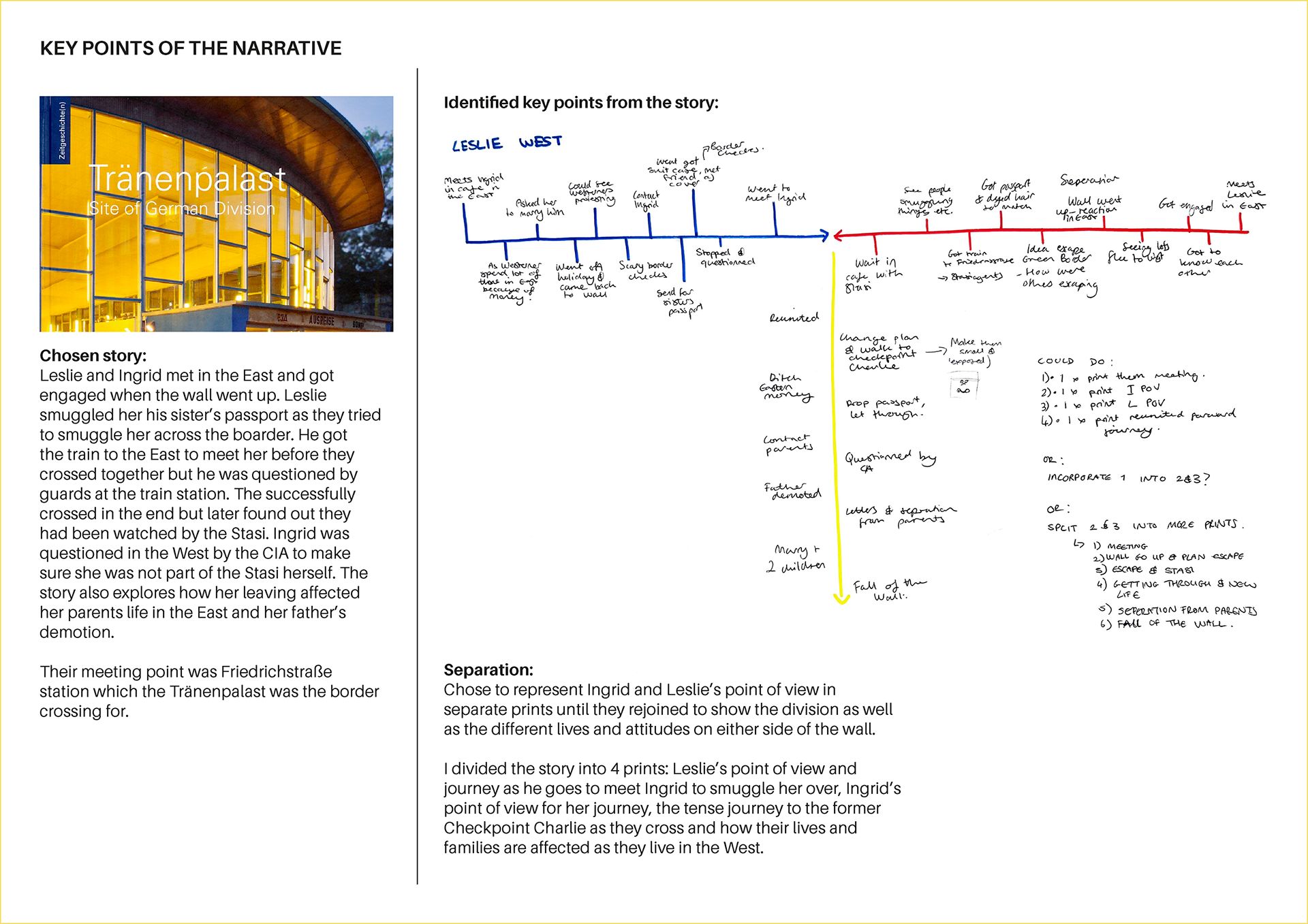 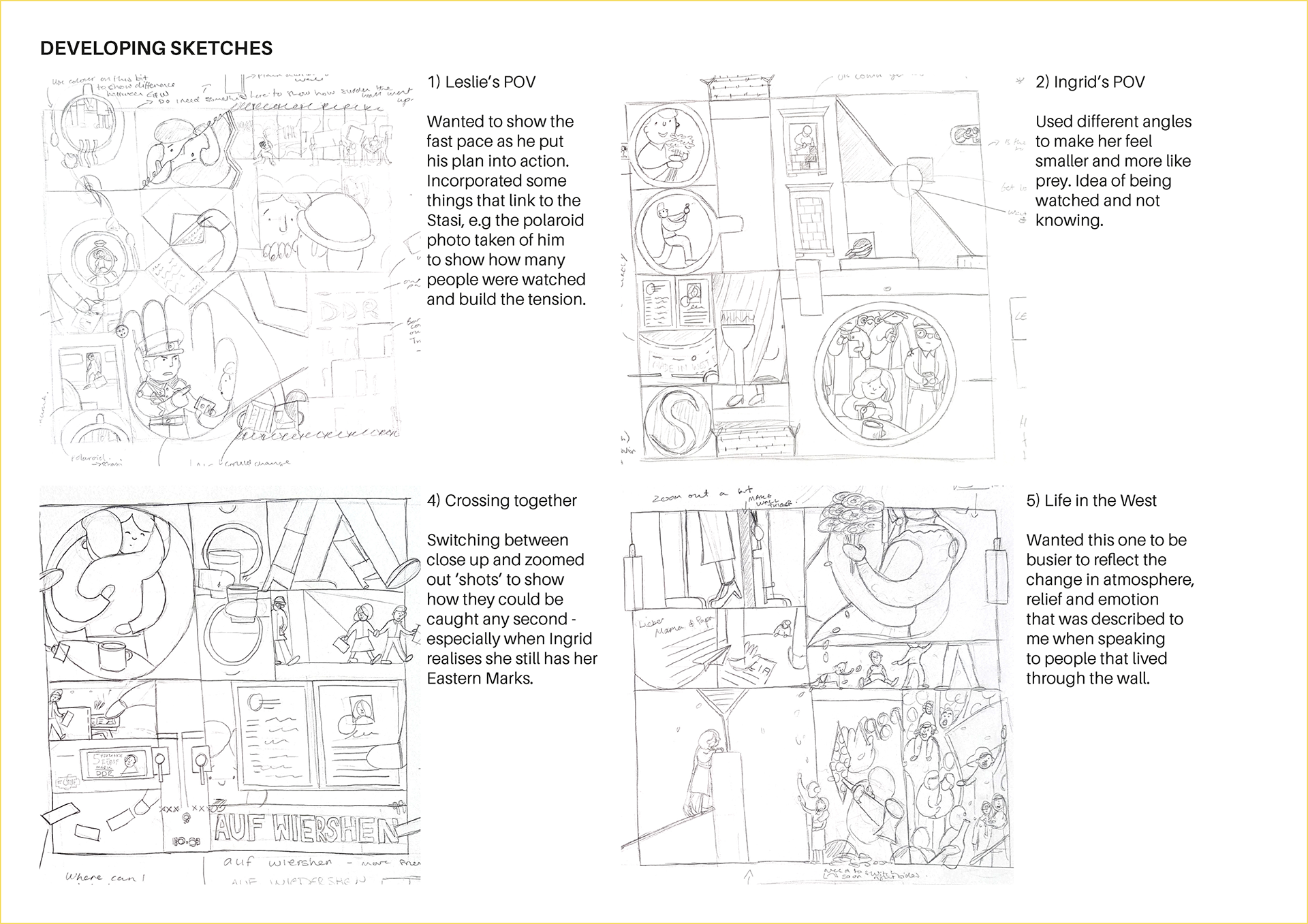 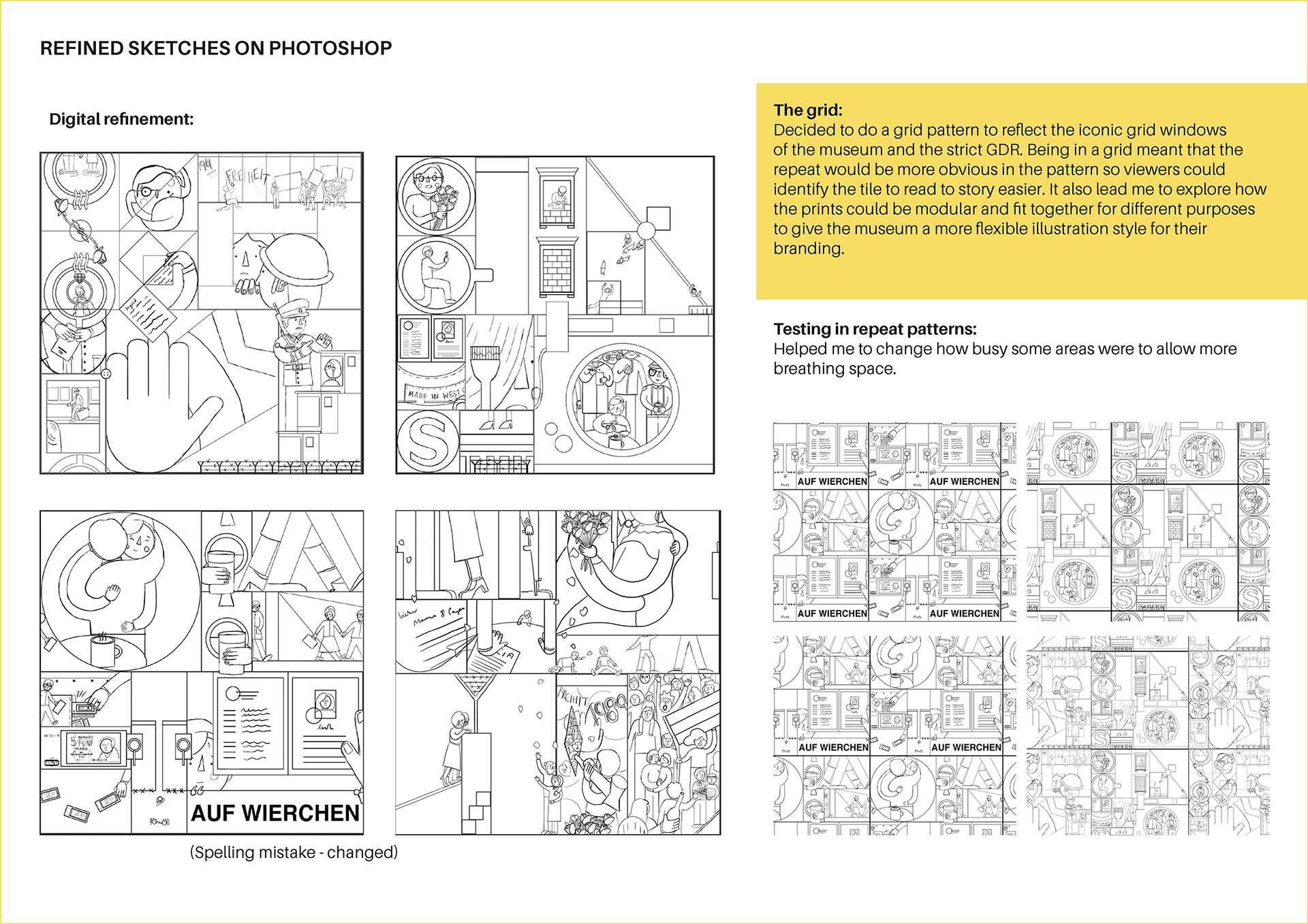 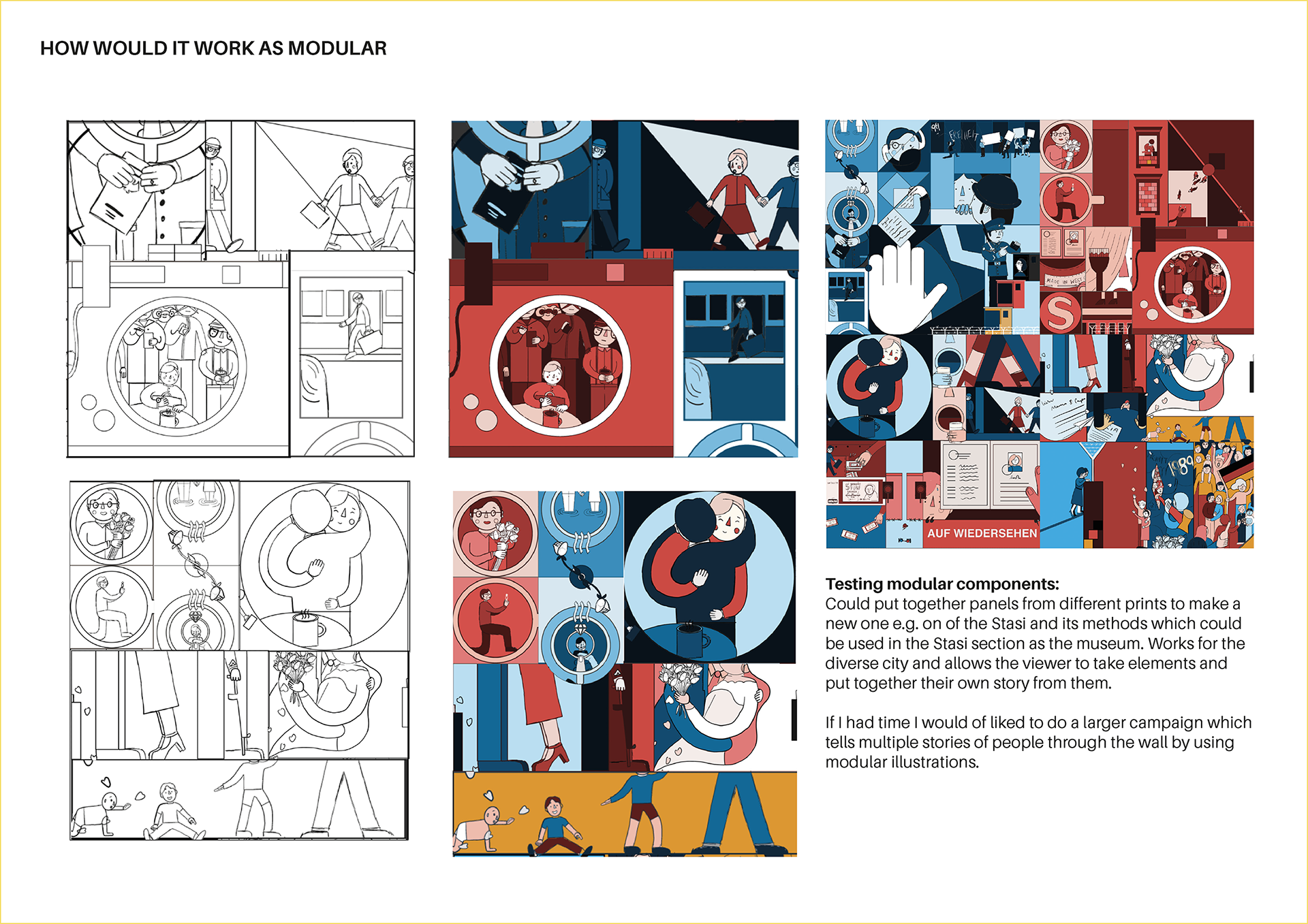 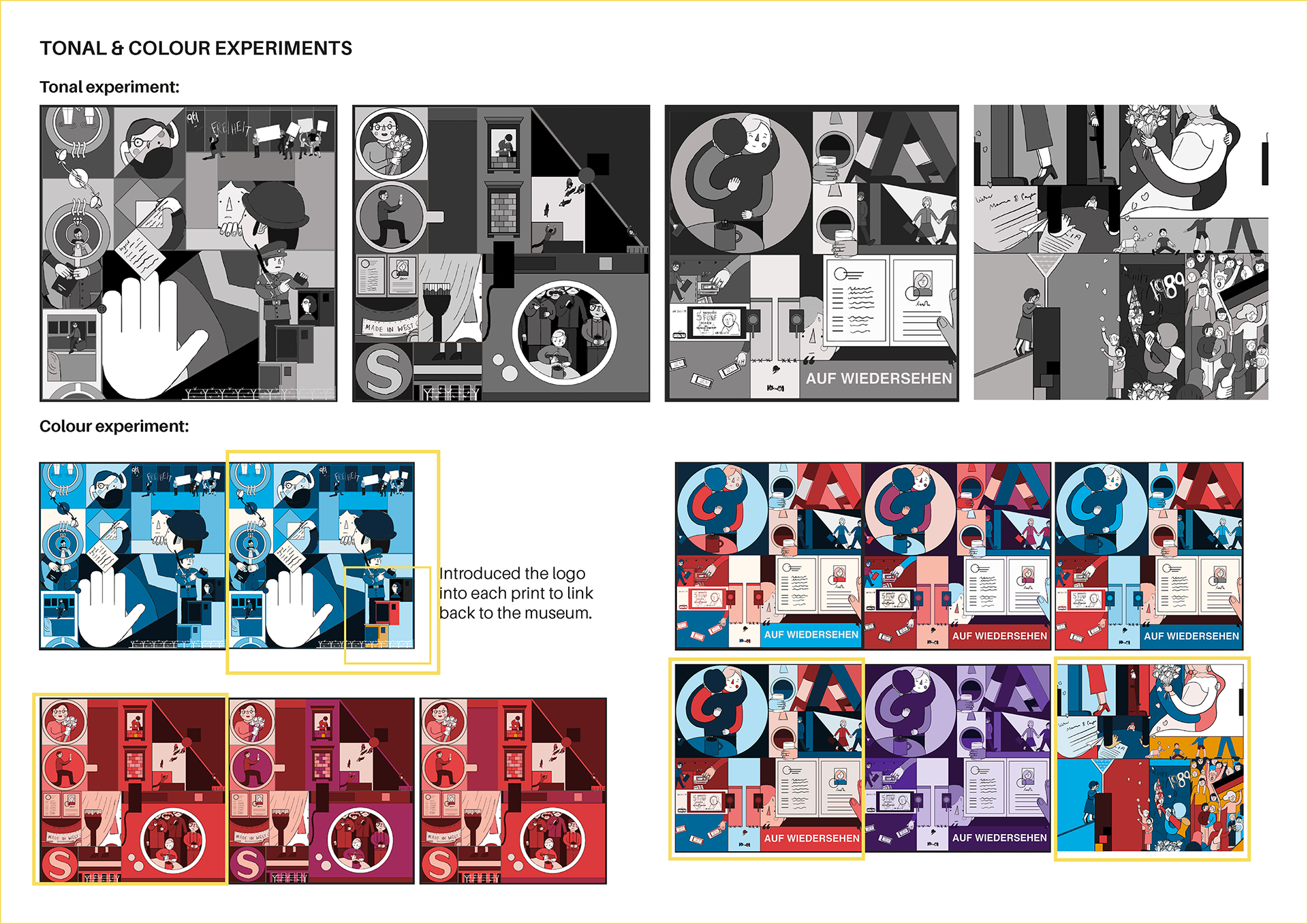 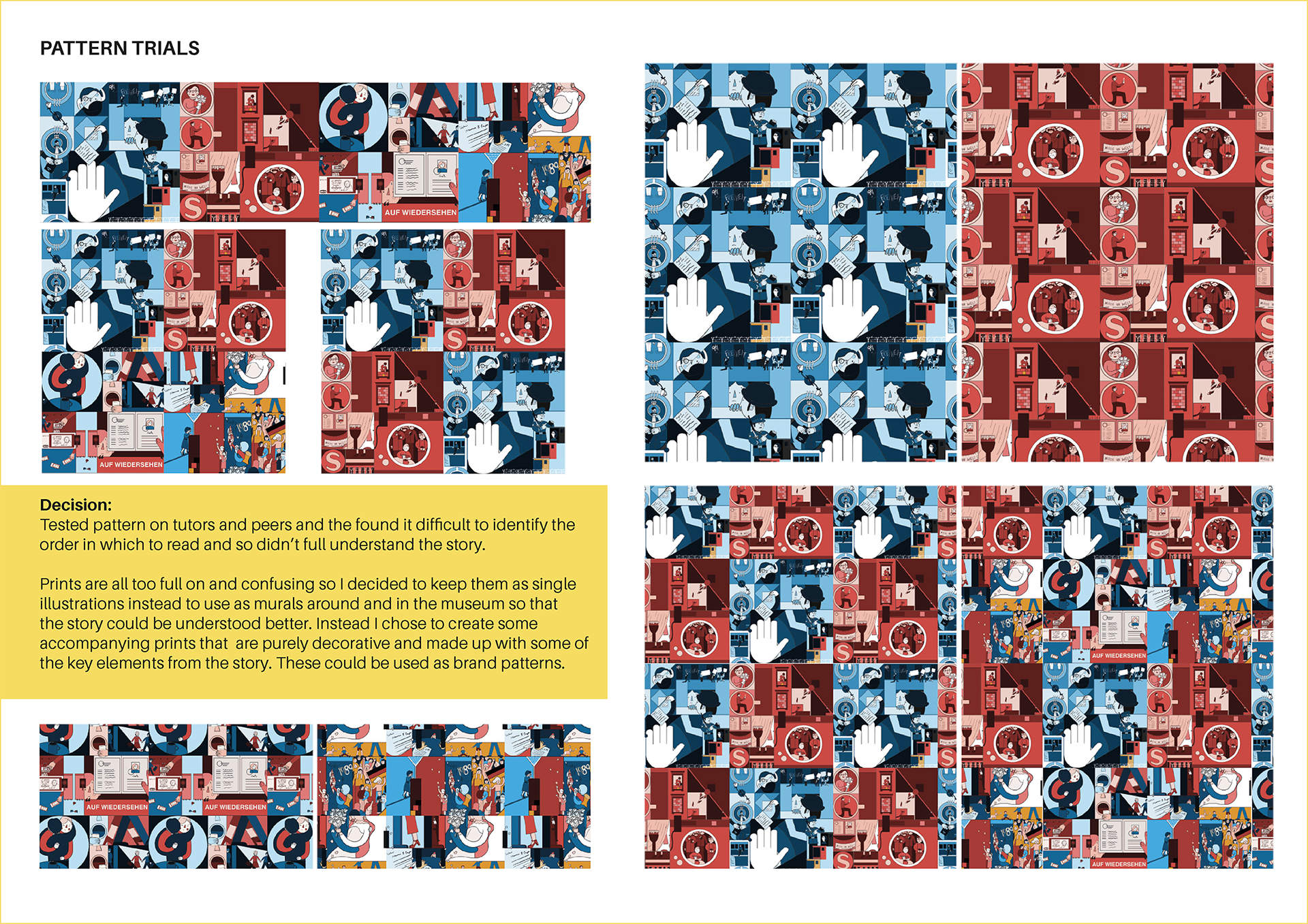 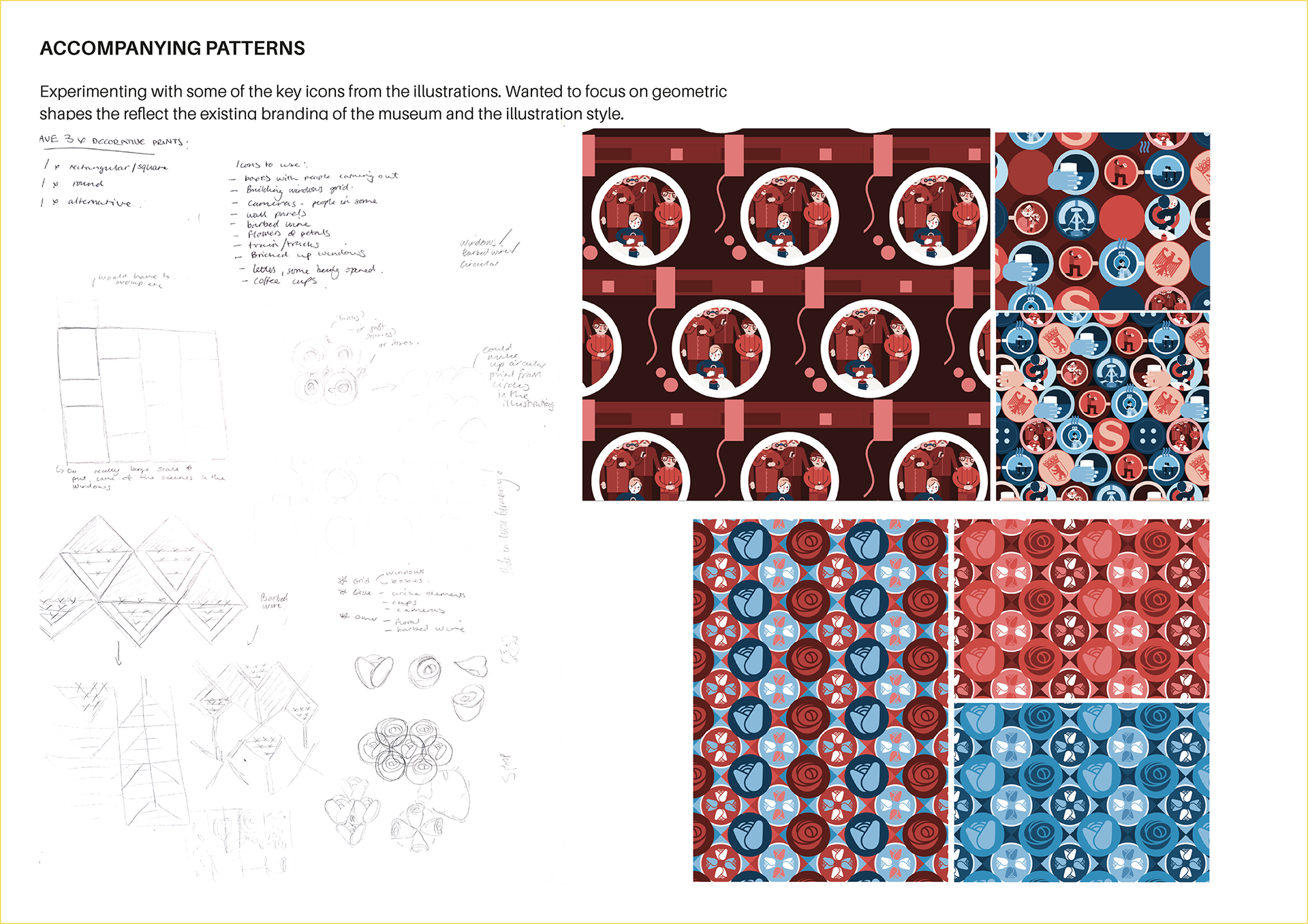 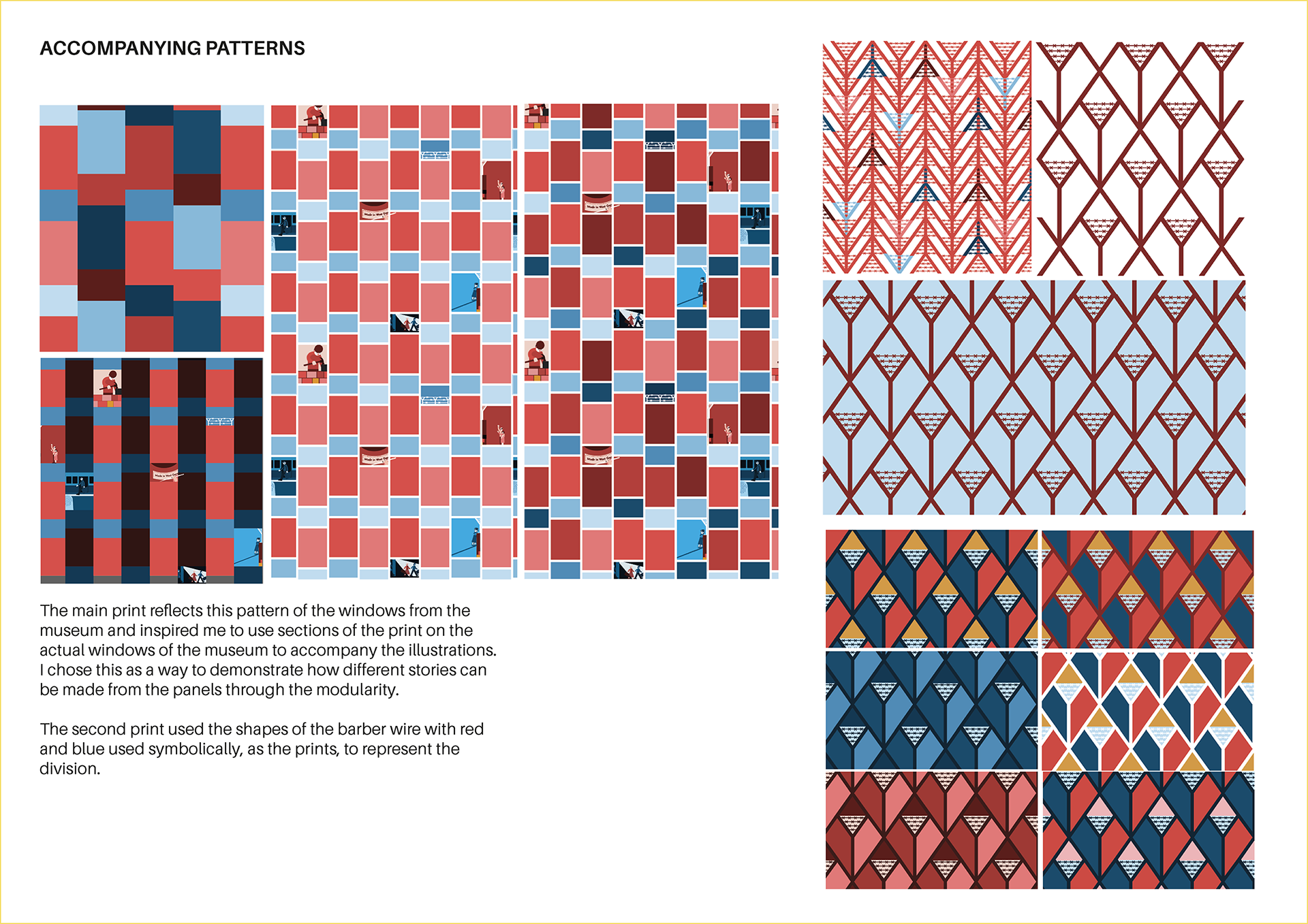